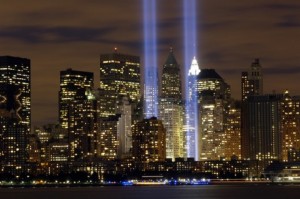 The “Tribute in Light” memorial is in remembrance of the events of September 11, 2001, in honor of the citizens who lost their lives in the World Trade Center attacks. The two towers of light are composed of two banks of high wattage spotlights that point straight up from a lot next to Ground Zero. The ÒTribute in LightÓ memorial was first held in March 2002. This photo was taken from Liberty State Park, New Jersey on September11, 2006, the five year anniversary of 9/11. USAF photo by Denise Gould.